When I first got a copy of this book, I managed to read about half of it.
I knew Carlson was offering up some good advice, but older books like this can be tough to get through. (Somewhat antiquated language, written by someone who's first skill is not writing, etc.) A few months ago, I got determined to read the whole thing from front to back and take notes as I did so. And I did so.

This book originally came out in 1928 as Elementary Principles of Landscape Paintings. My copy (pictured above) is a reprint from the 1950s. Nowadays there is a very affordable reprint available for around $14 in paperback.

Some strange things about my edition of this book:
- an odd choice of work to put on the cover. Far from one of Carlson's best, and it appears to be a watercolor (!) to my eyes. The book is about oil painting, btw. All understandable given Carlson would have had no say in this later reprint as he passed in 1947.

- There seem to be a similarly poor representation (to my eyes and tastes) of the quality of Carlson's work in the inner images as well. Again, he may not have had a say in that (or all of them). Also, there is a grand total of ONE color reproduction inside. Smack in the middle. What was the point of that? At least give us 6 or 8... Anywho... Carlson could churn out some amazing paintings and I have decided to sprinkle a few of those in this post to delight your weary eyes. 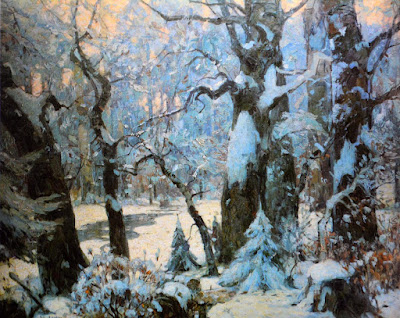 Morning in the Forest


As I read, I wrote down passages that clicked with me.
Below are some of the best ones, with the name of the chapter in which they appear.
(I also included some of my own thoughts and reactions here and there in blue.)


1. How to Approach Painting

"... the camera does not have an idea about the objects reflected upon its lens. It does not 'feel' anything..."

2. The Mechanics of Painting

"Do not be afraid to spoil what you have, so long as you know why you are making a change."

– This resonates with me. Some large area in a painting seems.... wrong. I think and think about it, putting off what seems like a risk, until I embark on the change and almost always it was the right thing to do.

"In most instances when the beginner finds the color of anything 'impossible,' the fault lies not in the color, but in the faulty value or weight of the mass."

– Another way of saying that value is predominant over color. Or that if you can't get the color right, get the value right.

"Nature is seldom perfect in design."

"No one can tell another person exactly what the color of anything is, because each of us has a variously differing 'color sense.'"

"It might almost be given as a 'recipe' that the smaller the dark mass presented against a light, the lighter and fainter becomes that dark."

– Especially visible as tree branches get thinner and thinner near the top. More light "wraps" around them and their value seems to lighten.

"... there is no such thing as flat tone in all outdoor nature – it is changing toward or from the light." 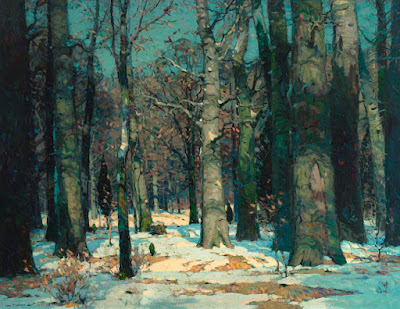 "The sky is the key to the landscape"

"... the student, by a very slight degree of self-analysis, can select his gamuts and harmonies, as well as his constructive lines of color, rather than merely stupidly taking things as they come in nature. We must not train our eyes to copy tone for tone, but think of the bearing of such colors and harmonies upon the main idea of our picture."
"Reserve us strength; overstatement is weakness."

– The downside of this can be seen in paintings where all the colors of the spectrum and a full value scale are present, but the painting doesn't work. Restraint.

"The painting of tress is best accomplished by much drawing of trees."

"... do not think that because a landscape is "real" that it is a work of art. A true picture is one in which so-called natural elements are made to function as an idea."

" The choosing of  expressive limitation is not child's play – it is mature choice."

– I relate this to expressive strategies like working with a limited palette, or reduced value scale. Those kind of limitations in the service of your painting can be what makes it work.

"A work of art in paint should be beautiful and expressive as abstract color and form and should not interest us necessarily in any "story" outside of itself..."

– A representative work of art should also work on an abstract level.

"Too much reality in a picture is always a disappointment to the imaginative soul. We love suggestion and not hard facts. A picture should be music in form and color, with the subject-matter the vehicle."

"Analyze your impression in order to approach expression..." 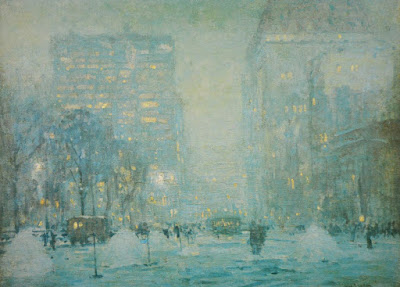 
13. The Extraordinary and Bizarre.

"... homely objects and effects are made sublime in their transmutation, in the passage from the artist's brain to the canvas."

– This is why the exercise of memory painting, or sketching a scene that moved you later on will often get you just the key elements, and not the distracting minutiae of needless details.

Those are some of the key points to my mind. I took a lot more notes than this and distilled them to the essential.